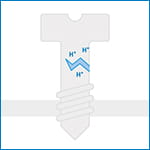 The embrittlement of metal caused by hydrogen atoms is not new. It was first reported back in 1875, more than a century ago. Nonetheless the awareness of the risk of hydrogen embrittlement, especially in mechanical fasteners deserves more serious attention.

Here is the reason why:

The failure of a fastener caused by hydrogen embrittlement is a delayed one. The breakage occurs not immediately after the fastener is assembled, but hours, days or even weeks later. Because of the nature of this failure, chances to detect hydrogen embrittlement during the in-process control or out-going quality check, is nearly impossible.

More than often products are already assembled and shipped. This has caused various companies immense sums for product recall. The damage on the brand image is unimaginable. It can happen anytime. Hydrogen embrittlement is a silent killer!

The white paper is about questions surrounding hydrogen embrittlement, especially in fastening applications. Peter Witzke from the Bossard Expert Team writes about: